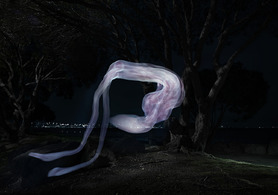 @echovirus12 is a collaborative twitter fiction page, run by a limited number of writers. Each new tweet echoes in some way the previous tweet or tweets through the use of shared imagery, words, themes, characters, etc. This creates a flow of self-contained microfictions that nevertheless share and pass on elements. The writers were sent the following set of instructions:
1. Write a self-contained fiction tweets.
2. Echo the previous tweet in some way.
3. Don’t follow your own tweet.

THE CONCEPT
1. Echovirus12 is a flow of tweets dedicated to fiction only, created by a group of writers in a collaborative process.
2. Tweets are linked by the use of ghost echoes.
3. No giant rolling narratives, but self-contained pieces that newcomers can enjoy as much as long-timers. Just a site a reader can either follow religiously, or dip into as the feeling takes them.
4. Writers do their best to create self-contained pieces which work in their own right. But it’s OK if occasional tweets need the help of the previous few, to make perfect sense.
METHODOLOGY
5. Each tweet to contain a ghost or an echo of the previous one.
6. Ghost echoes can be shared imagery, characters, themes, a story continuation, a single word, a feeling: anything really, as long as there’s a flow from one tweet to the next, no matter how tentative.
7. Over time, the system will self-regulate, and create its own world.
8. Narrative elements will probably turn up: these can be carried on for a few tweets, but shouldn’t run on for more than say four tweets. Eventually, other elements will take over anyway, in the natural run of things.
9. No pressures on this. Just fun. Users can tweet when they want. Or take a break. But…
10. You can’t follow your own tweet. This will keep the tweets fresh, keep the connections between them lively and strange. It will also discourage the building of long stories.
MISCELLANEOUS
11. It may be that one tweet answer will overlap with another, so a tweet might be ghost-echoing the last but one tweet. This is fine: the echoes will reconnect, as they may.
12. If some writers discover a shared narrative they want to explore more fully, this can to be done on a separate site, away from the echovirus page.
13. We want the echovirus page to contain just the fiction tweets and nothing else, so that the flow of echoes can be followed easily. So… no comments, no retweets from other people, etc. The rule is: never include the name @echovirus12 inside a tweet.
14. All tweets will appear under the collective echovirus12 name. So, essentially, tweets are anonymous. However… 1
5. Writers are encouraged to retweet their echovirus12 tweets to their own twitter pages. This will help to spread the word about echovirus, and will enable readers to find out who wrote individual tweets, if they so wish.
16. Individual tweets belong to the writer. They can place them elsewhere (eg. in books, blogs etc), with suitable reference to the echovirus12 source page.