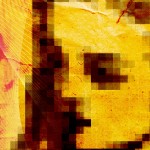 From CHAPTER I
THROUGH THE CLOCK’S WORKINGS
Alice was beginning to feel very drowsy from having nothing to do. How strange it was that doing absolutely nothing at all could make one feel so tired. She slumped down even deeper into her armchair. Alice was visiting her Great Aunt Ermintrude’s house in Didsbury, Manchester; a frightful city in the North of England which was full of rain and smoke and noise and big factories making Heaven-knows-what. ‘I wonder how you do make Heaven-knows-what?’ thought Alice to herself. ‘Perhaps they get the recipe from somebody who’s only recently died?’
The thought of that made Alice shiver so much that she clutched at her doll ever so tightly! Her Great Aunt was a very strict old lady and she had given Alice this doll as a present with the words, ‘Alice, the doll looks just like you when you’re in a tantrum.’ Alice thought that the doll looked nothing like her at all, despite the fact that her Great Aunt had sewn it an exact (if rather smaller) replica of Alice’s favourite pinafore; the splendidly warm and red one she was currently wearing. Alice called the doll Celia, not really knowing the reason for her choice. Alice would often do things without knowing why, and this made her Great Aunt very angry indeed: ‘Alice, my dear,’ she would pronounce, ‘can’t you make sense for once?’
Alice now hugged the Celia Doll even closer to her chest, where she wrapped it in the folds of her pinafore: this was all because of the lightning that was flashing madly outside the window, and the November rain that was falling onto the glass, sounding very much like the pattering of a thousand horses’ hooves. Her Great Aunt’s house was directly opposite a large, sprawling cemetery, which Alice thought a horrible place to live.
But the very worst thing about Manchester was the fact that it was – oh dear! - always raining. ‘Oh Celia!’ Alice sighed to her doll, ‘if only Great Uncle Mortimer was here to play with us!’ Great Uncle Mortimer was a funny little man who would always have a treat tucked away for Alice; he would amuse her with jokes and magical tricks and the magnificently long words that he would teach her. Great Uncle Mortimer was, according to her Great Aunt, ‘big in the city’, whatever that could mean. ‘Well,’ said Alice to the doll, ‘he may well be big in the city, but when he gets back to his home he’s really rather small. Perhaps he’s got two sizes, one for each occasion. How splendid that must be!’ Great Uncle Mortimer would spend every night smoking on his pipe whilst adding up huge rows of numbers, and wolfing down a great plateful of the radishes that he grew for himself in the vegetable garden. Alice had never seen so many numbers before (or so many radishes). She was not awfully good at mathematics (or radish eating), and the numbers one to ten seemed quite adequate to her. After all, she only had ten fingers. Why should anybody need more than ten fingers? (Or, for that matter, more than one radish?)
These idle thoughts only made Alice realise how dreadfully bored she was. Great Aunt Ermintrude had three daughters of her own (triplets in fact) but they were all much older than Alice (and Alice always had trouble telling them apart), so they weren’t much fun at all! There was nothing to do in Manchester. The only sounds she could hear were the pitter-pattering of the rain against the window and the tick-tocking, tick-tocking of the grandfather clock in the corner of the room. The housemaid had dusted the clock this very morning and the door of it was still open. Alice could see the brass pendulum swinging back and forth, back and forth. It made her feel quite, quite sleepy, but at the same time quite, quite restless. It was at this very moment that she noticed a solitary white ant marching across the breakfast table towards a sticky dollop of Ecklethorpe’s Radish Jam; the maid had neglected to remove this in her cleaning. Alice had tried a spoonful of the radish jam (it was Uncle Mortimer’s favourite preserve) on a piece of toast that very morning but had found the taste of it too sickly sour. The ant was now running over the jigsaw puzzle that Alice had spent the whole morning trying to complete, only to find (frustratingly) that fully twelve pieces were missing from the segmented picture of London Zoo. ‘Oh, Mister Ant,’ Alice said aloud (although how she could possibly tell it was a Mister from that distance is quite beyond understanding), ‘how is it that you’ve got so much to do, whilst I, a very grown-up young girl, have got so very little to do?’
The white ant, of course, did not bother to make an answer.